OHRA | A lot of steel for the wood specialists

Home / Allgemein / OHRA | A lot of steel for the wood specialists

A lot of steel for the wood specialists

With a variety of different cantilever racks from OHRA, Van Dorp Hout solved the challenge of being able to continue to supply its enormously growing customer base with goods quickly and sufficiently while maintaining the same storage space. The leading specialist in garden timber in the Randstad region of the Netherlands purchased cantilever racks with a total length of more than 240 metres in 2019 and 2020 – in various heights, some with roofs. Today, customers can be supplied with the desired goods more quickly, efficiently and at shorter notice. Thanks to the racking, Van Dorp Hout has been able to increase its storage capacity in the relevant areas by 40 per cent.

Until now, Van Dorp Hout stored the wood piles with lengths of one to eight metres in long rows on the ground in these areas. Since the boards, beams and planks were picked by hand, the stacks could not be higher than one and a half metres. This left a lot of unused “upwards” space in the storage areas.

With and without roof in different heights

“We have known OHRA since 2010. Since then we have been a big fan of the very simple and robust racking system,” says Managing Director Henk-Arie Schra. “Besides the technical specifications, we also appreciate the easy assembly of the racks.” So it was no problem for the Van Dorp Hout employees to assemble the low racks themselves – although the wood experts had to deal with the unfamiliar material of steel. The heavier, high racks were installed by OHRA’s fitters. Today, Van Dorp Hout stores the daily demand for goods on the lower levels of the racks and the longer-term demand on the storage levels above. In addition, the company uses four-way forklifts and conventional forklifts to store and retrieve the goods. Overall, the wood can thus be stored much more efficiently. Not only is there room for a larger quantity of items, but Van Dorp Hout has also been able to expand the range with additional items.

It all started in 1930 with beams and boards for the farmers near Zoetermeer. In 1995, the Van Dorp family took over the local timber trade and developed it into a specialised supplier of outdoor timber. Today, the company is a reliable partner for do-it-yourselves as well as for commercial customers from the gardening/landscaping and civil engineering and hydraulic engineering sectors. The product range is correspondingly wide – from garden fencing to decking boards and hardwood bulkheads. With individual advice and services, Van Dorp Hout has made a name for itself as an expert in wood for outdoor applications in the region – always with the aim of realising sustainable solutions in wood. 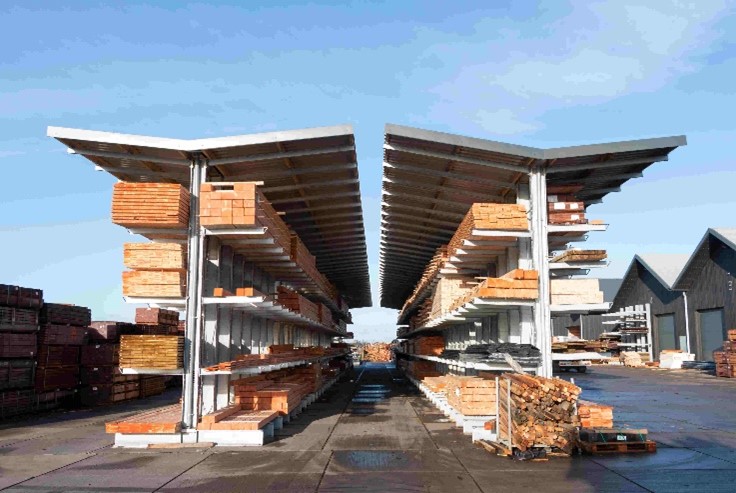