Denmark: Construction boom slows down in the post-lockdown era

Denmark: Construction boom slows down in the post-lockdown era

The pandemic caused a slowdown of economic activity in 2020, in Denmark as elsewhere. The downturn of 2.1% was rather small, however, and the economy has grown considerably since then. Already in the second quarter of 2021, GDP was considerably above pre-pandemic levels in real terms, even though the lockdown wasn’t over. Since then, the economy has grown further. In the present situation, the most significant problem for business is lack of labour, particularly (but not only) skilled labour. Despite these limitations, the outlook for 2022 indicates an average GDP growth rate of more than 1.5% p.a. for 2019-22, i.e. including the lockdown downturn.

For construction, trends have been very good. Construction output grew more than 10% during 2020, led by civil engineering, followed by residential construction. Construction was not under lockdown; on the contrary, it was seen as one of the activities which should be supported to avoid a sharp upturn in unemployment. Thus, several policies were implemented to speed up construction in 2020-2021. Inter alia, local authorities were allowed to spend much more on construction activities than usual and support schemes for residential renovation were expanded. At the same time, unlike in previous crisis periods, residential property prices were rising, and owners were able and willing to spend more on renovation. In hindsight, it seems that politicians were perhaps too eager to support construction as this has caused several bottleneck problems, price rises and delays – but compared to doing nothing or even locking down construction (or other types of physical production), it has been a huge success.

During 2021, construction activity has continued to grow, although growth rates are lower than in 2020. The residential boom is not quite over, but price rises are slowing and interest rates rising; this dampens activity. The boom had to slow down in any case as delays, price rises, labour shortages and other issues are already hindering some activities. The forecast for the next years is one of continual growth, but at much slower rates than in 2020. Some drivers are discussed below.

Note that there are significant uncertainties. Obviously, the pandemic (will a new variant cause a strong third wave?). Also, the global supply chain issues, the energy prices, the generally rising inflationary trends, interest levels, and others. However, the mainstream forecast at the moment is that most of these issues will be temporary.

A significant domestic uncertainty is the development of property taxes. The present system is a mess, partly due to extremely poor political decision-making. A misguided belief in automation and poor project management (both technical and political aspects) means that for several years, we have known that property taxes would be changed, but had little idea of which way they would move. By now, it is pretty certain that taxes on city flats will become higher, while taxes on some other types of property will decline, but at what rates we do not know. The new system is to be implemented from 2024 (if it works by then…). I suspect that for a number of present buyers, the upcoming change is simply not factored into expectations as it is too hard to estimate the consequences. If this should change during the next two years, if the present project revision turns out to be successful, there could be considerable effect on the relative prices of different properties and some effect on construction.

Another, brighter, factor for residential construction is a new set of policies on affordable housing proposed by the government early October 2021, which we expect will be passed by parliament during the next months. The plan includes building 26.000 extra residential units (4.000 for students, 22.000 for families) during the next decade. Since the price of suitable building sites has been a main barrier for the existing housing associations, considerable sums will be set aside to help finance suitable building sites in the areas where an expansion of affordable housing is most needed – i.e. mainly in Copenhagen, where it has been increasingly hard for e.g. nurses and teachers to afford housing. As most political parties agree this problem must be solved, the proposal is likely to be realised, perhaps with some changes.

For non-residential construction, private activity has largely suffered during the pandemic (with logistic centres as the main exception), but public activity has been allowed to expand. However, labour shortages etc. mean that several projects have been delayed, limiting growth in this field somewhat.

For civil engineering, the largest present project is the giant project linking Eastern Denmark (incl. Copenhagen) and Southern Sweden closer to Germany by the Fehmarn Belt road/rail link being built during the next 8 years, supported by improved road and rail infrastructure on both sides of the tunnel. By 2030, this will offer much faster surface travel than the present ferry connection.

Some sea-based windmill farms are planned (Denmark already has a number, but there’s room for many more). It has been planned to build an artificial island far out in the North Sea offering a hub for servicing the windmills far from the shore, a hub for the actual cables and facilities to produce e-fuel when there is more wind power than needed for immediate use, as frequently happens. At the moment, this island is just an idea, but with considerable political support.

The Lynetteholm project is an artificial island (or isthmus) too (illustration, the area marked with a blue line). A main driver for the project is the need to protect central Copenhagen against high sea levels; while rising sea levels are a long-term challenge, it’s already an issue under some weather conditions. The installation of flood gates (as known from e.g. London and Venice) could solve this, but this project has further advantages: a) Surplus soil from other construction projects can be dumped here, for a fee; b) connecting roads and a subway will create better infrastructural conditions for the rest of the city, too; and c) at 2.8 km2 there will be room for both residential and non-residential construction, with about 35.000 people living there and about 35.000 jobs too. Together, these factors are planned to make the project self-financing (although there are some doubts about this). The project starts in the second half of 2021, but it is worth noting that it will be built in stages and will not be finalised until around 2070. 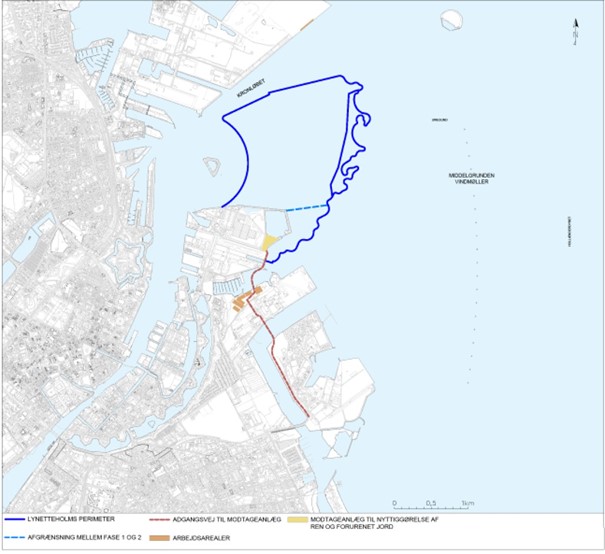 More artificial islands are planned at the South end of Copenhagen, with room for more jobs including manufacturing; the timing of this project (if it is realised) is not clear at present.