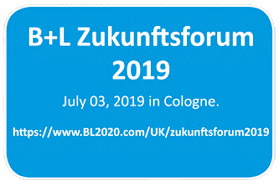 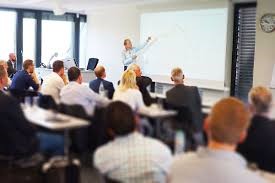 B + L has been one of the suppliers of market information from Euro-Mat for some time.

On July 3 of this year the “Zukunfstforum” took place in Cologne, Germany.

GPD has been virtually stable in recent years, now at 3.6.

Oil price has been stable for some time at $ 60 a barrel.

There is considerable overcapacity in China. This undoubtedly leads to stagnation.

In Western Europe, the construction volume, “growth”, has been only 1% since 2011. The same trend is also expected for the years 2020 and 2021. Greater growth is only expected for NAFTA and Asia.

The population in Europe will fall, despite the great immigration of the past few years.

Consumer confidence is declining. The PMI dips below 50!

The office market is a capricious market with a cyclical movement of around 5 years. The demand is not bad at the moment, but the stock is higher than the demand.

Another finding is that the regions that do well continue to do well. No shift of activity. Investments can be made reasonably risk-free based on this information.

Switzerland has a shrinking population. Rents are falling as a result and vacancy is growing. The number of completed homes has fallen from 55k in 2017 to 47k in 2019.

Austria has an overcapacity in the residential area, as a result of which a falling price trend is visible.

In Belgium, the pressure on housing prices will decrease due to the shrinking population.

Consumer confidence in the Netherlands is falling sharply. A constant strong market is expected for the coming 2 years. The renovation is particularly large. A shrinkage is expected after 2022.

In the UK, only the Industry Index is negative. There is a large growth in the number of applications for housing and the number of permits issued has also grown strongly.

In France there is a population growth. On average significantly higher than in the rest of Europe.

The Danish market is coming to a halt. Expectation is still a small growth in 2019.

In Sweden there was talk of an overcapacity in the housing stock.

After a number of years of major declines, Russian construction is now stable and slightly growing.

The Turkish market is dramatic. Mortgage interest rates of more than 20%.

Despite a strong government stimulus in Hungary and therefore a relatively large growth, the number of houses to be built is still relatively low compared to the surrounding countries.

The Polish market is probably growing too fast. In Poland, on average, more people live per home and therefore by definition have a lack of homes. There is also a large influx of people from the Ukraine who want to settle in Poland.

The Turkish market is very unhealthy. It is expected that there will be many bankruptcies.

BIM was also a topic for discussion. According to B + L, BIM will remove the “middle Man” (trade) from the chain. BIM has not “landed” in contracting in many countries. A digital twin does not yet seem relevant to the normal home.

Logistical changes due to digitization. Velux now sells its parts on-line. The argument is that this is easy from a logistics point of view. The trade does not have to keep it in stock. The expected next step is the delivery of the component directly to the contractor.