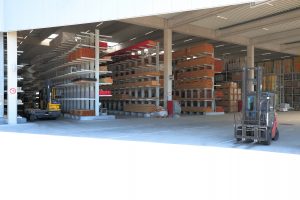 Vehmeyer, one of the largest building materials retailers in Emsland / Germany, has significantly expanded its storage capacity with a new 5,800 square metre warehouse.

OHRA supplied and installed over 25, and in some cases over 42 metres long and more than 7 metres high — cantilever and pallet racks within a tight time frame.

This means that a wide variety of building materials can now be stored much more clearly. As a result, customers receive their goods more quickly, the logistics processes have been streamlined, and overall warehouse availability has been increased.

Prior to construction of the new warehouse in 2018, the goods — building materials, wood products, underground and garden/landscaping materials, tiles and interior fittings as well as hardware store items, were stored in small warehouses with a maximum of three to four storage levels. This restricted the efficiency of the logistics processes and it was difficult for customers to find the right goods. So Vehmeyer decided to bring all the goods together in a new, central warehouse. The prerequisite for this was a rack system with which the highest possible storage capacity could be achieved in the available space.

For this reason, Vehmeyer chose OHRA. The company produces extremely robust cantilever and pallet racks manufactured from hot-rolled steel profiles. This enables high loads with a slim design – and thus ensures good use of space. Moreover, OHRA had the production capacity to implement such an extensive project within a tight time frame. 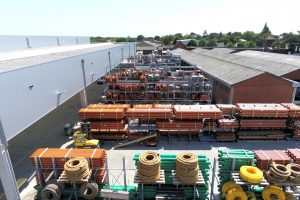 In total, OHRA supplied more than 25 cantilever and pallet racks for indoor and outdoor use. Each rack was individually tailored to the installation site and the goods to be stored. For example, the bay widths for pallet racks are between 2,400 and 4,500 millimetres, for beam loadings of 3 to 5.5 tons. The load-bearing capacity of OHRA’s rack construction allows for good utilization of the building height with six beam levels. The same applies to the cantilever racks. They have a load-bearing capacity of up to 6,750 kilograms per column per side. Depending on the goods, this can be used to implement up to nine storage levels. The unique clip in arms, with load capacities of 750 kilograms, enable easy adaptation to a changing range of goods.

The rack system thus offers the necessary capacities for further expansion and is an important part of Vehmeyer’s growth strategy.

The roots of E.A. Vehmeyer OHG date back to 1805 when Ernst August Vehmeyer founded a brick factory. It was later supplemented by a sawmill. The brickworks no longer exist today, but Vehmeyer operates the largest softwood sawmill in north west Germany. In addition, the company continuously expanded its timber and building materials business, it operates its own hardware store in Haselünne and supplies private and professional customers far beyond the Emsland region. 109 employees generate annual sales of over 40 million euros.

The success story of OHRA Regalanlagen GmbH officially begins in 1979: Ottokar Hölscher founded a company for the production and sale of racking systems. Thanks in particular to the innovative cantilever racks, the German company was able to quickly establish itself on the market: In contrast to the competition, the arms of the cantilever racks are simply clipped into the punched upright profiles – thanks to this patented solution, the cantilever arms can be adjusted at any time without tools. Cantilever arm and pallet racks from OHRA are characterised by their particularly high load-bearing capacity, robustness and durability. The portfolio ranges from simple shelving solutions to complete racking to complex, fully automatic storage and picking systems. With customised logistics solutions, OHRA has established itself in a wide variety of industries and now has its own sales offices in 13 countries. In 2019, the European market leader for cantilever racks celebrated its 40th anniversary.